Posted on November 15, 2010 by thesunonhisback

Rolling into Melaka, a 4 hour bus ride North from Singapore, we hopped off the Rock n Roll bus, and headed into town on the local air-conditioned Nr 17.  Transport is just so easy in Malaysia.  The town itself is very quaint, colonial in style, steeped in history, and all the buildings are painted red.  Seemingly this was a British idea to save on maintenance costs in the 19th century, as the red dust from the streets was consistently kicked up from the road, so this saved them having to paint the buildings so often.  There is a river meandering through the town, with little arch bridges, and little ferryboats that glide up and down all day. 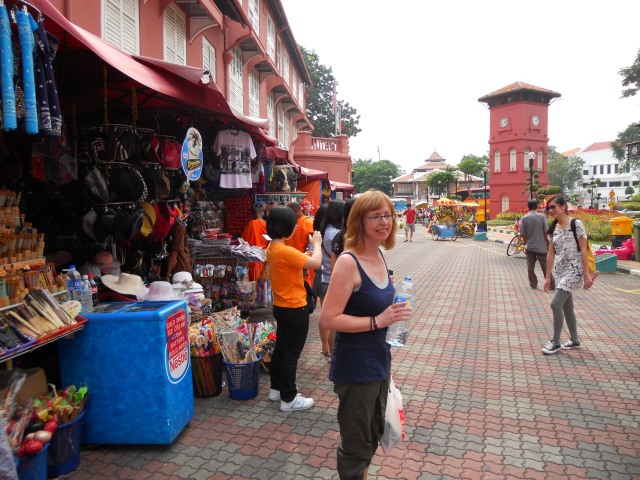 We walked over the bridge, and met our first tout. The difference this time, was that when we politely declined his offer to stay at his hotel, he immediately gave us directions to the place we had in mind.  Malaysia is just so much easier. We actually stopped halfway to the place we intended staying, as we spotted a really nice little chinese hotel, offering spotlessly clean air-conditioned rooms. Thankful we were for this Air-Conditioning. Melaka was extremely hot, probably the hottest we have experienced so far, and on one day, we could do nothing but chill out  🙂 Get it? I’ll get me coat 😉 and stay in the room playing cards and chess. I’ve been teaching Michelle chess over the past few weeks, and she is becoming really quite good, although she hasn’t beat me yet so far.  This is good, because I’ve been getting slaughtered at cards over the past month by the Cairdmester 🙂

The Malaysian people are so friendly, and love their Western music.  All the cheesy classics from the 60/70/80’s are played throughout the bars and it really does make you feel like you’ve been taken back in time.  We love it !  Strange thing was, I remember posting about this before when we were in Panang, and I couldn’t believe it when, on our first night, we sat down at the Discovery cafe for a beer, and the first song the girl on stage sang was Anne Murray’s “You Needed Me”.  We looked at each other in complete bewilderment and disbelief.  Anne Murray could make a massive comeback here !

We did all the usual things, visiting the museums, sites and checking out the town, etc.  Chinatown has a fantastic street market at the weekends where the streets are closed to traffic, so it was good just browsing at all the art and craftwork.

We met a lovely couple, Edina from Hungary, and her partner Ian from Denmark.  Ian was Danish, but it was quite funny listening to his accent, as he has a distinctive Scottish Burr. We both noticed this every now and then, and slightly confused, we mentioned it to him.  It turns out his dad is from Greenock !! His dad seems a bit mad from the story’s he was telling us, we had a great time with Ian and Edina and were sorry they were going home.

We had come to Melaka at the time of Deepivali, the Hindu “Festival of  Lights”. We were instantly worried that this was going to be like Ramadan again, when transport and accommodation would be an issue. We were relieved to find out that it was only a celebration for 2 days.  The shop owner over the road was Arun, a Hindu, and he told me his shop would be closed for the next week.  I had got to know him quite well, and he asked if we would we fancy coming to his house on Friday for lunch ? Of course, no problem.  We arrived at his shop on Friday at 1pm to find his shop closed and no sight of him.  The chinese owners of the cafe directly across the road, asked us to come over, and said they had been asked by Arun to drop us off at his house.  So we met Alex and Renee, and they took us up to Arun’s.

Arun had a huge Indian buffet on the go, with 3 different currys, tandoori chicken, vegetable pakura, and nan breads. We tucked in and met a lovely retired Malaysian couple at our table, Roger and his wife Iris.  We spoke about how the Malays all like their western music.  Roger rattled off his favourite artists, Johnny Cash, Tony Bennet, Frank Shinatwrah 😉  We all got on well, and I mentioned the Blue Diamond in Penang, where we ended up staying for the week, and told them all about me being up on the stage singing a duet of “Danny’s Song” by Anne Murray with the owner every night.  They found this hilarious, and weirdly, they actually knew the owner of the Blue Diamond very well.  They then asked us back to their house for Malaysian coffee. (Very sweet, and made with Carnation condensed milk – it’s almost like a coffee flavoured hot chocolate, and it’s pretty addictive stuff).  We spent the afternoon with them and had a right old laugh as they showed us their wedding photo’s where they dressed in their traditional chinese attire and told us funny stories of when they were young.  It was a great afternoon, and Alex thanked us, as he had just made 2 new friends as result of taking us up to Arun’s.

The next day in the street, we felt like locals, as James, our friendly bar tender from the Discovery was shouting hello to us from across the street, while Alex and Renee waved to us, and Arun was shouting to us, asking if we enjoyed the food.  Such a friendly place, no wonder we stayed for almost 2 weeks ! 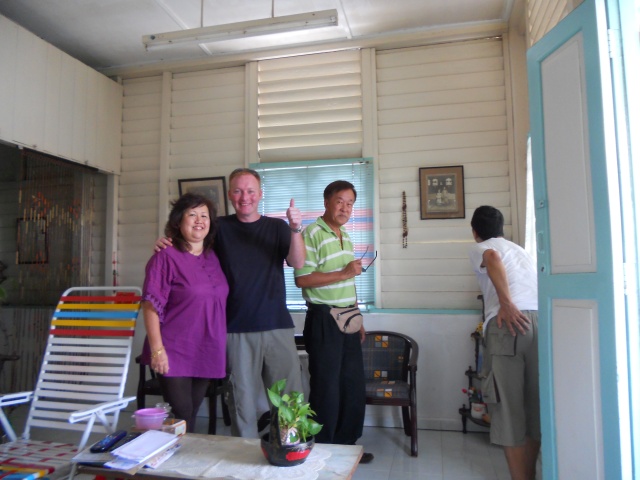 So, we had met Sammy Davis Jnr in Penang, Ronaldo in Sumatra, and I just couldn’t believe it when we went in a bar for a beer and a game of pool, when no other than Omar Sharif asked us what we like to drink. I didn’t have my camera with me that day, but I did for this one – me and Will Smith 🙂  Will was on holiday, and is going to meet up with us later for a few beers in Kuala Lumpur.

The one thing we will remember about Melaka is the Tandoori Chicken.  They have a hawker centre where you get half a chicken, a chapati, and tandoori sauce for about 6 Ringets, that’s just over a quid !! 🙂  The stuff is divine and we must have went there about 4 or 5 times in the space of the 11 days we stayed.  We had to keep stopping each other from going, you just can’t eat this 3 days on the trot.  But we did ha ha !!!  We spent some time at the cinema, its air-conditioned and good respite from the heat.  So far we have seen Red, which was quite cheesy, but really quite funny, we both enjoyed it.  We also saw The Takers and Skyline – nothing to rave about here though 😦

And so we finally made it back to Kuala Lumpur, and have had that beer at the rooftop bar.  As soon as I walked in we were greeted from Chris, the barman, who remembered us from 2 months ago.  Chris is just the nuttiest bloke I have ever met, good fun, mad as a hatter, and things he looks like Ronaldinho.  I just think he looks really mad, but you can make your own mind up 🙂

We met Ben from England, now’t wrong with the English, you just wouldn’t want to be one – right Ben ? 😉 Ben had just done a tour of Eastern Europe and into Asia, and his last place, and most favourite place was Myanmar (Burma).  This was on our intenary but we didn’t know exactly when.  We do now though, as we are flying there on Friday !!  This is another special place, and our main aim is to get to Bagan.

Bagan is another ancient place, and pretty spectacular from all the photographs we have seen.  It’s always been on the list of “must see before you die” locations.

Will says Hi to all the folks back home.  He was a terrific bloke, very funny, and he likes a good swally !! 🙂