Posted on January 5, 2011 by thesunonhisback

We kind of just take these overnight bus rides in our stride now, you would be surprised how quickly the time goes when you’ve got some reading material, an Ipod, and a mini laptop to watch a movie together. We arrived in darkness at 5am as planned, and as usual we could see all the local touts getting ready to set upon us. Without engaging the touts, we quickly found our hotel, dumped the bags and made an on the spot decision. Tired and weary from the journey – we were going to visit a temple before sunrise.

Getting the map out, we picked the nearest, and took a 40 minute walk by torchlight to Buledi. Having walked past numerous temples en route, and being blown away by the shear number, the magnificent architecture and colossal size of these ancient constructions we arrived just as it was getting light. At first we were slightly disappointed that it was overcast, but when we climbed up the steep steps of the temple, we were completely awestruck at the sight of the plain, with temples dotted all over. A low level mist hovered eerily in wisps over the plain, creating a sea like landscape from which the larger temples broke through the surface. It was outrageously picturesque, and apart from a photographer who had perched his tripod on an adjacent temple, we were virtually alone.

While discussing the place, we suddenly spotted a small orange glow on the horizon. We had been mistaken about it being overcast, the day was yet to begin, as this huge ball of orange slowly rose from the horizon, sending sharp beams of light across the plain. We watched in awe, with each second passing, the valley was lifting itself from a cold eerie place to a bright vivid orange and yellow glow, and the colours of the temples and landscapes were revealed in all their glory. The next thing we saw were two large hot air balloons high in the sky, the noise from their occasional burn was all that broke the silence. Bagan had until this point just been something to read about, with amazing photographs from books I had read over many years. I can remember showing the photographs to Michelle years ago, and dreaming of seeing this place. It was immensely satisfying to watch Michelle completely awestruck, and recalling those thoughts and discussions from the past. We had made it to Bagan. 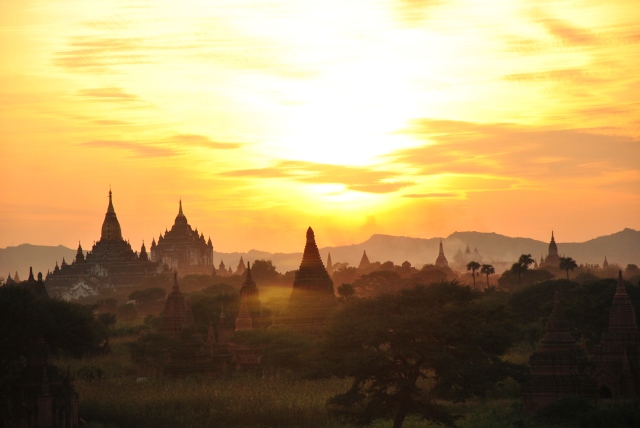 After a good while just taking in the scenery, we scaled down the precarious steps ready to go back to the hotel and get some sleep. We were going to need to get recharged, as there are supposedly 2000 of these monuments, and that morning had inspired us to visit as many as possible. The thing was, we had got past that sleepy stage, and felt completely awake. On returning, we noticed that the local eateries were opening up and so were the bars. Michelle needed fed, and I need watered. Rudi decided to stay up all day as he was returning home in the morning. Michelle ate and I had a couple of beers. It was just one of those days when life felt really good.

We were in bed one hour later, completely comotose.

That afternoon, we had overslept to see the sunset. So with chess set in hand, we explored the little village of Nyaung U, one of three in the area, the others being Old Bagan and also New Bagan. I think we made the right choice of location as the other villages are extremely touristy, with inflated prices for both food and refreshments. Our village was quaint and relaxed, with friendly locals, and a single strip of restaurants and bars on either side of a dusty road – almost all having only 2 or 3 customers. That night we had a curry with Rudi, and were back to bed by 11pm.

The next morning we got up and met the girls on the street in Restaurant Row. They had also arrived around 5am, and just like us, had stayed up to watch the sunrise. They were practically gushing with excitement. We had some breakfast, and made a plan to get transport to Old Bagan about 3 miles away, and planned to walk through the sandy, dusty tracks connecting each temple on the vast plain. Some of the temples are absolutely massive, but sometimes the smaller ones are more interesting. They are tourist free, you get the place to yourself, and the design of many means that you can climb up externally or explore from within. There were some with various small hidden corridors and ascending steps to take you up to the platform terraces. There was one in particular where we climbed the steps, and were taking in the views when we suddenly heard Carina shouting down to us excitedly from a higher platform. She had found a small opening inside which had hidden steps within, so we all started to search for it as Carina shouted down instructions from above. It does not pass your thoughts that you are exploring something created centuries ago. A tremendous day already, but we also managed to get to the huge Dhammayazika Paya just as the sun was going down – In all probability one of the most majestic temples in the whole of Bagan. 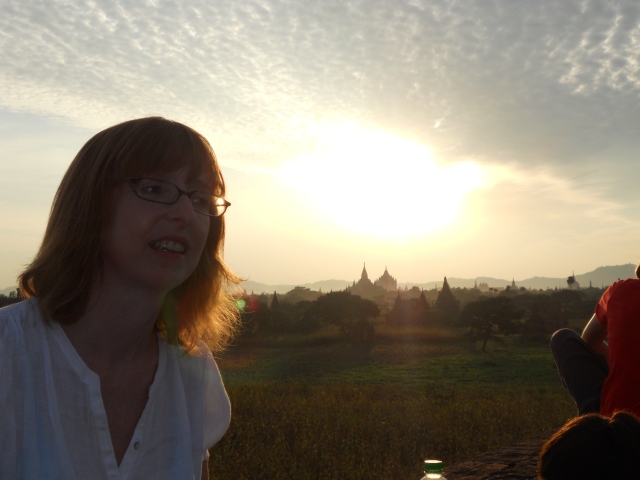 Now all we had to do, was work out how to get back to Nyaung U in the darkness having covered 7km that day on foot. As luck would have it, Sofie thumbed a passing tourist coach. The coach was empty, and the driver offered us a lift – for free!

The next day, we did the same again, but made sure we were not stranded far from the village, and did a loop of some of the lesser temples, returning us within 2km of the village with prearranged transport pickup at Sunset. We climbed a small ruined monastery, supposedly one of the best for sunset as advised by the locals. We sat on the flat stone roof and watched the sun going down, taking photograph after photograph.

We spent quite a few days in Bagan, it was hard to leave. The place is beautiful, the scenery atmospheric and the village is just so relaxing. The final day before our departure to Mandalay, we headed out to visit Mount Popa, about an hour or so from Bagan. This is a huge monastery topped hill, 737m high, that you can climb to gain tremendous views over the area. We organised local transport and our guide stopped to show and allow us to sample some local rice whisky being produced. On arriving, the local teenage girls surrounded us, and Michelle had thoughtfully packed all the hotel soaps and shampoos. These girls just seemed so grateful and thankful.

On our return to Bagan, I decided it was time for a beer, and after 2 or 3, decided it would be a great idea to rent a bike and go and see one last sunset. Only Sofie was up for it, so off we headed racing down the road to beat the sunset. I felt like a kid again as I put everything into the race with Sofie, feeling invincible and wondering where all the energy and power was coming from in my legs. It was quite obviously coming from 3 pints of Mandalay Blue Label Beer, as next morning, I felt like I had been trampled on by an angry bull. Every muscle in this 40 year old body was aching painfully, and everyone was laughing as I hobbled my way to the bus like a decrepit old man that had soiled himself. Next stop was to be Mandalay.