Pai, pronounced “Bye” has become thoroughly addictive, and everyone we meet has been raving about the place and telling us how they planned to stay a couple of days, but have ended up staying a week. We have been here only 3 days, and have similarly decided to stay another couple of nights before heading down south en-route to Bangkok.

There is one other destination to reach which is a halfway point, so we should get at least a couple of days in Sukhothai, which is another of those UNESCO world heritage historical sites, with ancient ruins built some 800 years or so ago by a kingdom succeeding the Khymers. It will also help break up the long journey back to Bangkok.

But what makes Pai so special?

Well, for a start it is very relaxed, and a very quaint rural village set on the banks of a murky chocolate coloured river. The place is very colourful with vivid green, large leafed tropical plants, palm trees, exotic flowers and all surrounded by high misty topped hills. The accommodation in the main tends to be thatched bamboo huts, in various styles and sizes. Although of basic construction, they are actually quite luxurious inside, with 4 poster beds, flushing toilets and hot showers. The best part though, is they only cost 4 quid a night 🙂 I keep expecting David Bellamy to jump out of the foliage surrounding our porch while I drink another beer Leo. 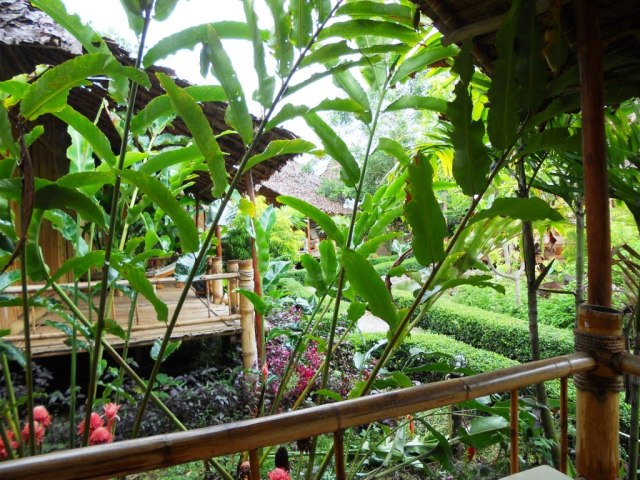 There are rickety and shoddily constructed bamboo suspension bridges spanning the river and connecting our little jungle resort to the village. 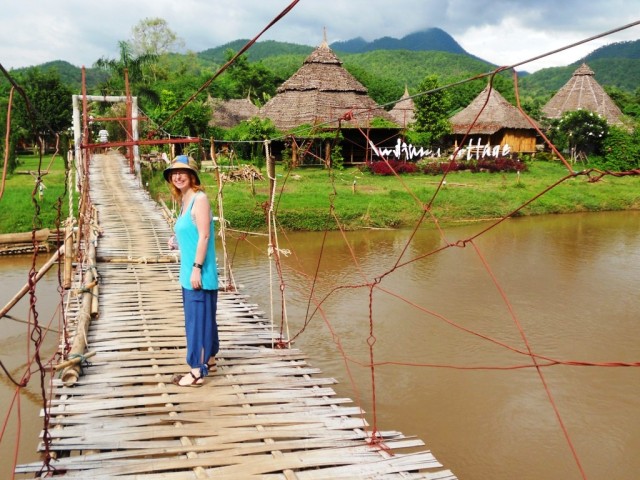 I bet you’ve love to see us trying to get across this at 1am in the morning after a couple of couples !!

One night we were sniggering as we tried to cross this in the dead of night. I told Michelle if I heard a large splash, she should just let the current take her downstream and I would just meet up with her in Bangkok in a few days. We managed to get across, and stumbled on a wee bonfire party just outside our hut, with a local guy playing some “Geetar”. We joined the group and were really enjoying ourselves, until we realised that this “Johnny Cash” couldn’t sing a single note in tune, and with his geetar also being out of tune, we were killing ourselves laughing when he had to stop half way through each song to tell everyone which one he was actually meant to be singing. I then remembered I had seen this guy in the morning, cracking open a bottle of Asian Whiskey around breakfast time. He was also trying to play the mouth organ – it was like watching Les Dawson playing the piano. 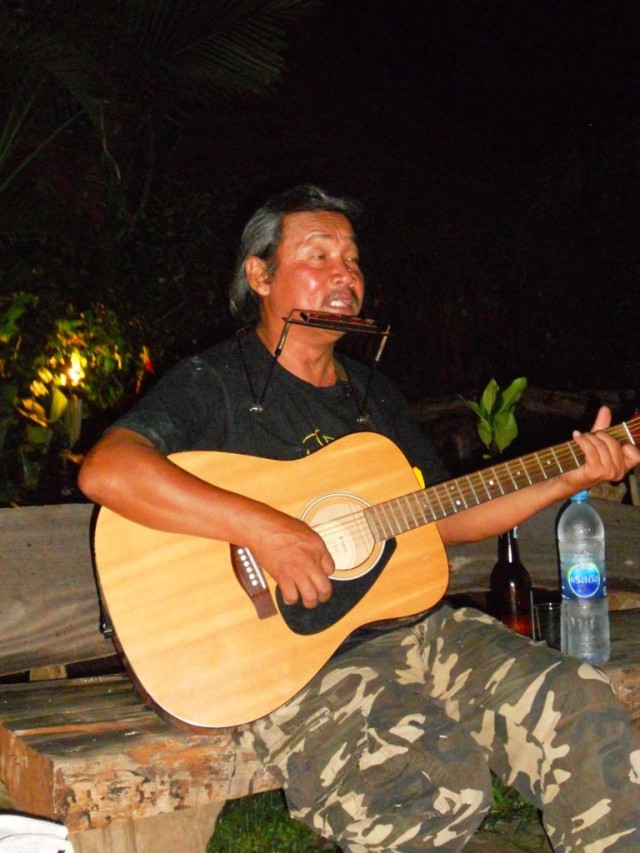 The village is virtually transport free apart from the occasional purring motorbike or cycle slowly and casually passing through. Travellers sit in bars chatting, people watching, reading books, or surfing on mini laptops. The bars and restaurants are all painted in bright colours, and look quite rustic, quirky and cool. The little streets are choc full of these haunts, interspaced with little art galleries, craft shops and smoking BBQ stall’s. At night the place is quite ambient with multi coloured atmospheric lights and little bars playing chilled out music or live acoustic performances. In the quieter areas, all you can hear are the sounds of the jungle, with crickets chirping, geckos clicking and calling, and the occasional roar of a lion or tiger. Okay, I maybe took that last bit too far 🙂 But there are elephants here though! 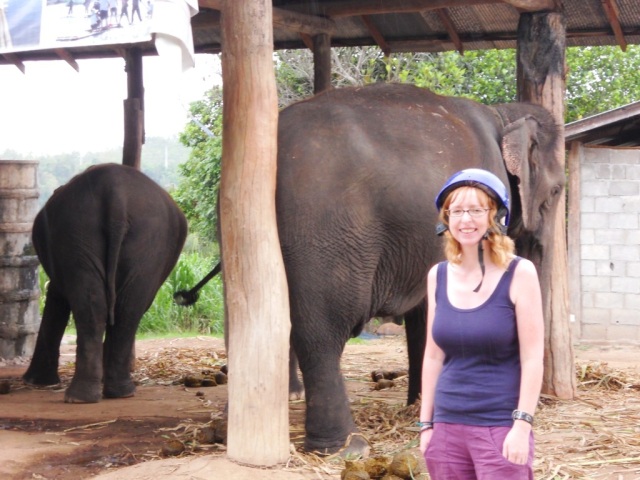 The real pull, apart from the ambience, seems to be that relaxed atmosphere generated by some of the friendliest locals we have encountered for quite some time. There is no hard sell, no touts, and no scamming, just friendly smiles from chilled happy family orientated people.

Motorbike rentals for a whole 24 hours costs only 100 Baht, which is probably the cheapest deal ever, and amounts to about 2 quid. The cheapest we have had in Asia so far had been about $6, but the bike had to be back by 6pm the same day. With a full tank of petrol costing about 2 quid, it really is a great deal, and it is great fun and let’s you take in more of the place and the surrounding countryside. 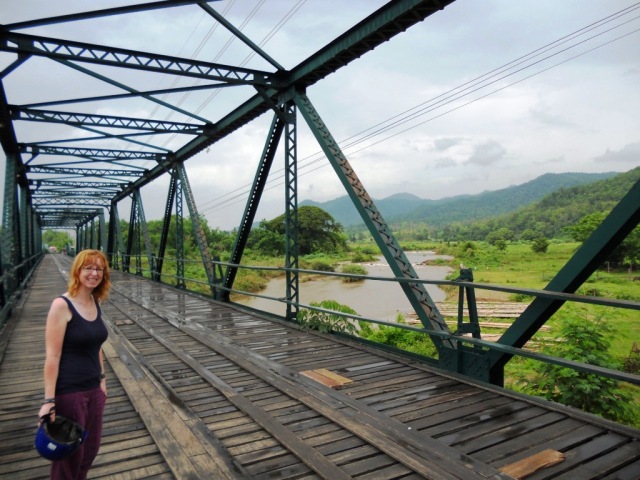 We have just arrived back having been on the bike all day visiting a waterfall, some natural hot springs, an elephant camp, the Pai Canyon (Canyon? My Arse!), a Chinese village, and the Japanese bridge. We nearly got soaked in a downpour earlier in the day, but anticipating this, and ever prepared just like good boy scouts, had taken our waterproof ponchos with us that we had bought in Hue, Vietnam. We had only just put the bloody things on when the sun was suddenly out again, and within a minute or so we felt like we were practically being steam cooked alive and couldn’t get the things off quick enough.

What was great about this for both of us, is that we know this leg is coming to an end, but being on the bike cruising through the beautiful countryside really brought back some good memories. The first time we had ever done this was on the island of TukTuk on Lake Toba in Sumatra, Indonesia sometime around early September last year. That now feels like a lifetime ago.

My mind started to wander, and I was virtually running through the whole trip again in my head, and trying to remember all the places we had been, the hotels we had stayed in, the journeys getting to each place, and all the people we had met along the way.

I then got really serious and started to think about Bacon Rolls, Black Pudding, Bridies, Steak Peh!, Mince and Tatties with HP sauce, Stovies, the Agacan Turkish restaurant on the Perth Road and ……. and Michelle had to plead with me to stop mentioning all this stuff, we have just under a week to go. 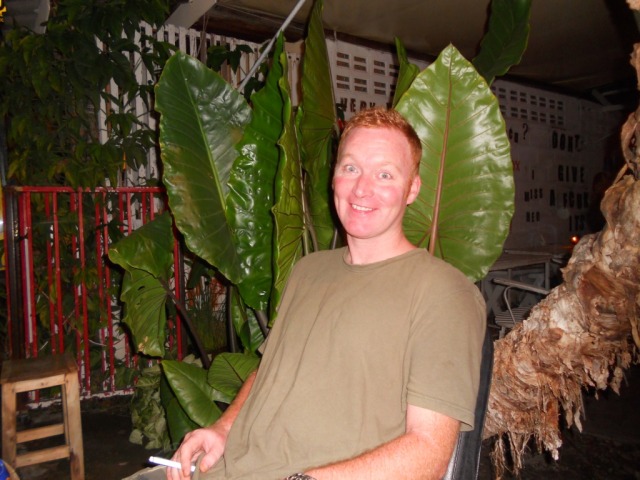 We leave here tomorrow, and it looks like we will have to do an overnight stay in Chiang Mai before heading to Sukhothai next day.