It was quite easy to leave Pai, as we had arranged to take a local bus which was about a 5 minute walk from our jungle hut. The journey was quite an easy one, and we were dropped off in the old town. After finding accommodation, we freshened up and strolled out for something to eat and have a little wander about to get a feel for the place. The old town is really a one street affair, with the historical park on one side of the road, and just a handful of local restaurants on the other side, and all very reasonably priced.

Without really doing much that night, we were joined a by Nadine, a lone German traveller. 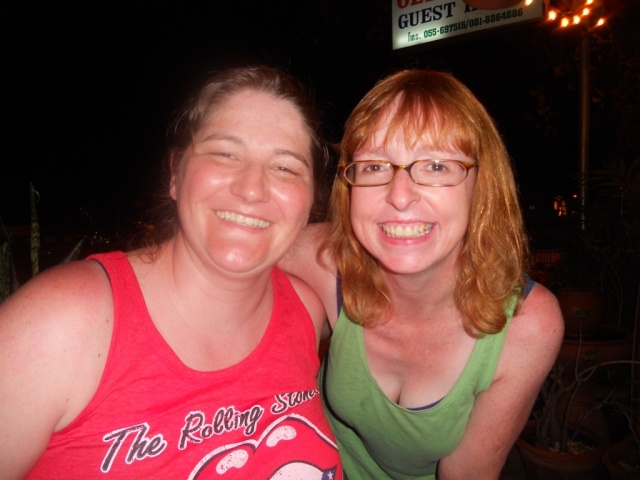 We were all getting along quite well, and decided we would all hire motorbikes next day to get around the park and surrounding countryside. We really were enjoying biking around the area, and we entered the park heading for the first of many ancient monuments, when suddenly I noticed all too late that we were heading straight for a mud bath. It was too late, and before I could apply the breaks, the bike got bogged down quickly and Michelle and I toppled over sideways in slow motion. We landed at 90 degrees and were completely stuck in about 6 inches of stinking thick mud. Nadine did not know whether to look concerned or just laugh. When we eventually got up caked in thick sticky mud, we could do nothing but laugh, especially when a local bunch of kids who had seen the whole thing were giggling and laughing at the sight of us. 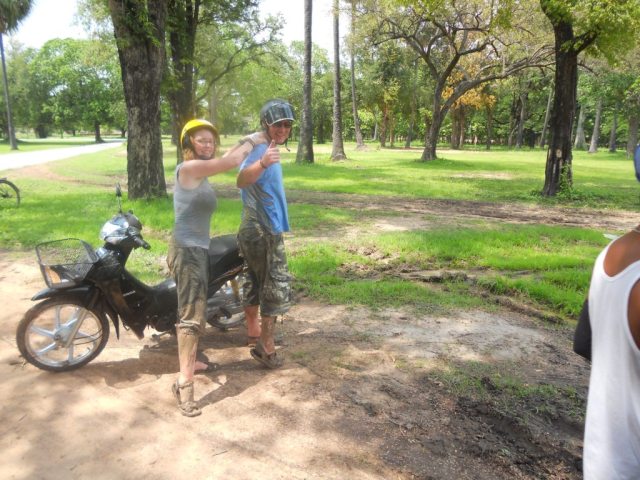 We headed back to the hotel to get cleaned up, and within half an hour we were on our way again.

About an hour later we stopped for some extra fuel, when a Buddhist monk gestured to us putting two clasped hands to his cheek, which we assumed was an invitation to see a sleeping Buddha statue. We followed the friendly monk and happened across a large colourful temple. 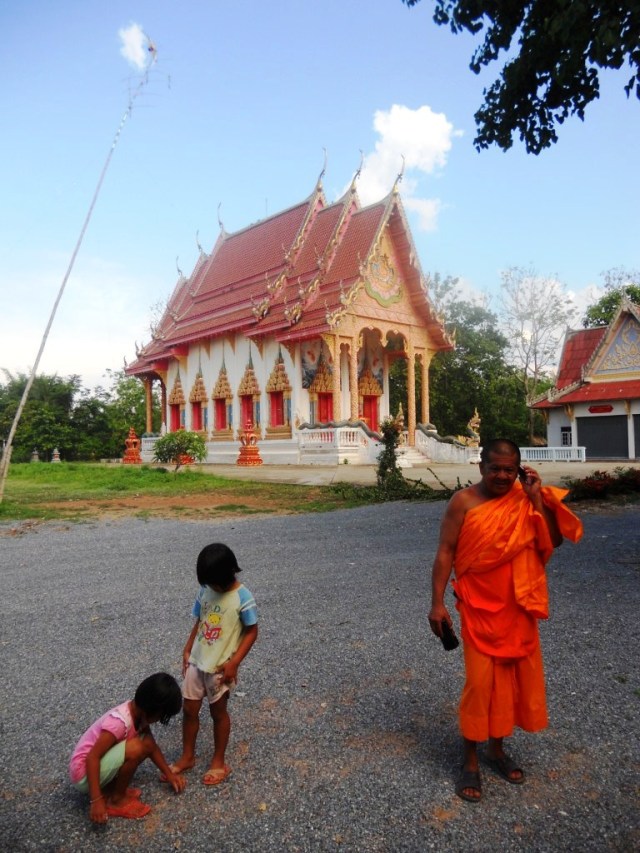 Locals were all hanging about in a large marquee and looked bemused to see us. I suppose we had managed to get off the beaten track, and were really out in the sticks. We were smiling and waving as the monk led us up to what seemed like large chrome altar. Smiling, the monk gestured us over to look and he opened a side door of the altar. Our faces dropped. What was inside was the body of an old lady, and all we could see were the soles of here feet, and further into the darkness, the bottom of her chin and nose surrounded by a mass of grey hair. We were completely shocked, and now understood his “sleeping” gesture, and really did not know what to do. The monk was smiling and laughing, as were the locals and small children surrounding us, and we were just completely confused.

We made as quick an exit as we possibly could, saying our goodbyes and thanks to everyone, and politely trying to make out we were short of time by pointing to our watches. In Asia, death is celebrated, and sometimes the body can be left like this for months until it is time for the funeral, which is normally a cremation held in full view on the streets. You see, here, death is a good thing, as it means you are on your way to the next life, so this is to be celebrated and not mourned. The monk however insisted on taking us to see the temple before we could depart. 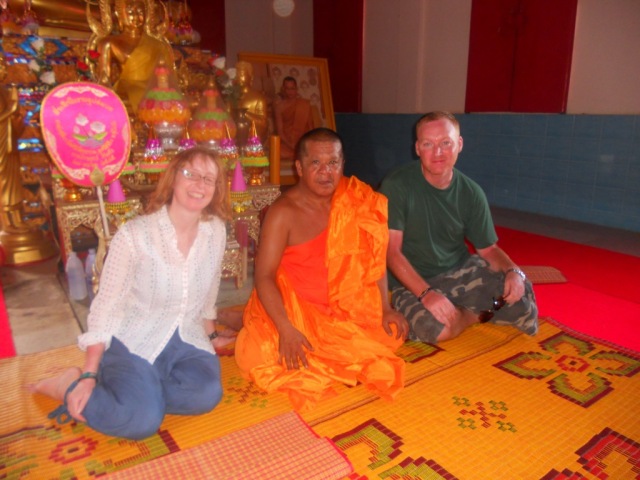 Luckily for us, it was after 4pm, and so moving on, all the staff from the historical park would be finishing work for the day. This meant free entry to the full site and we could drive around and take in all the sites at our leisure! Okay, more temples, but the place is really tourist free at this time, and it is so tranquil and peaceful. 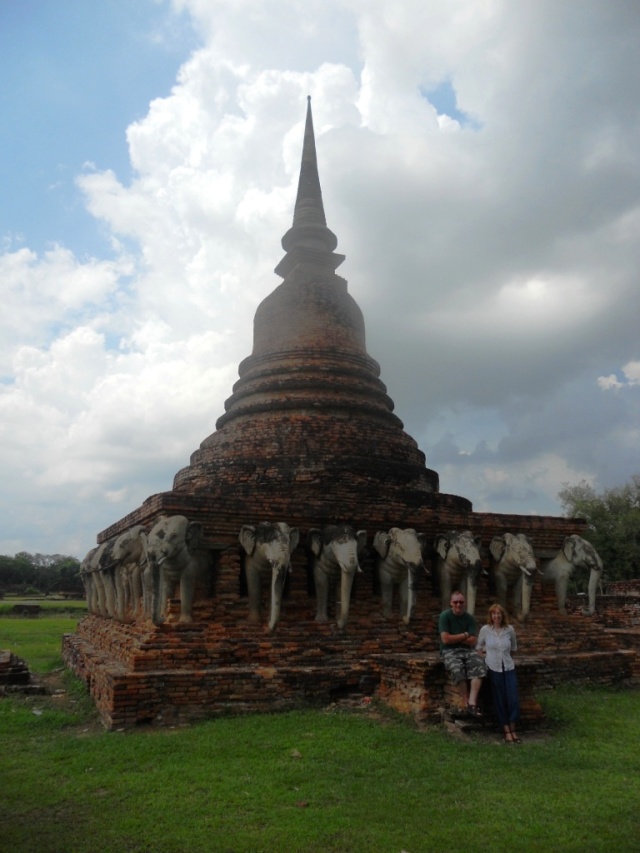 The scenery is pretty gorgeous surrounding the area too. This would be our last day in rural Asia before heading to Bangkok in the morning. I was silently feeling very down about going home. Yes it will be nice to see everyone, but I just feel so happy here in Asia, miles away from any stress, and especially with the heat, the scenery, the people, and most of all, the freedom from any routine. I really found it hard to be excited about leaving, and there is definately unfinished business here. 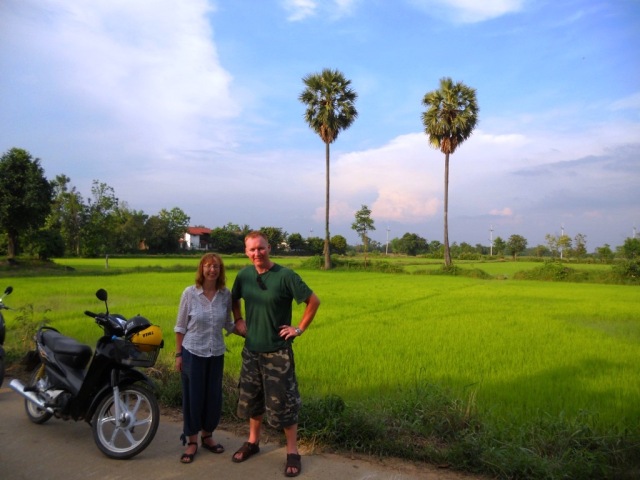