Posted on August 20, 2011 by thesunonhisback

The look on the faces of Mama, Dan and Job and the warm welcome we received as we arrived at Apple Guest House were priceless. My old mate Dan Beefcake, an ex Thai Kickboxer, was bit less chatty this time. I had loaned him 1000 Bhat (20 quid) last time I was here which he said he would repay on my return. I can only assume he thought after 3 months he would not be seeing me for a very long time – if ever again. I suppose he won’t be out partying this weekend.

Spending only 2 days in Bangkok, we had some things to organise. Michelle need new sandles and I need a small money belt – not one of those huge bum bag things that tourists wear – a discreet version that doesn’t say to robbers “Hi, I am a western tourist numpty. All my money, credit cards and passport are in this huge bag attached to my waist in full view with just a simple plastic release clip at the back – please help yourself”. We also needed a small daypack backpack so we could travel with minimal weight.

Job swiftly done, and then to acquire a new Chess set, a nice little wooden number for around 350 Bhat. Michelle has been getting thrashed at Chess lately, but the tide will turn, each game is getting closer. We left the monster backpacks at Mama’s in safe storage, and can now move with little daypacks containing 4 T shirts, 4 bumpants, 2 shorts, 1 Bra (Michelle’s), 2 plastic lightweight rainmacs, 1 mini laptop, 2 Ipods, 1 camera, and 2 Books. We took our dirty clothes with us and would have them laundered for a dollar when we arrived in Ayutthaya.

We took the local bus to the train station, arriving at 2.28pm with 2 minutes to spare before the train to Ayutthaya left the station. How lucky. This would be a short 2 hour journey, sitting in a carriage which looked like it had been used in an old John Wayne cowboy movie. There was an elderly American guy in front of us wearing a hat with material that draped down over his shoulders and fastened at the front so that only his eyes could be seen. He was wearing a pair of dark shades however, and in the extreme humid heat, he must have been sweltering. It looked strange and it felt strange. Things began to get even stranger when the train rolled out of the station. The carriages were just like I say, from an old western movie, and when you walk out the carriage doors to the inter connecting carriage, you basically stand on a platform in the fresh air. One slip, and you are off the train and on the tracks. Locals would smoke here and the smoke would drift through the carriage. Weird American guy was going nuts, waving his arms around and shouting obscenities, while continually slamming the door shut. The doors were actually being left open all through the train to afford additional ventilation. All the windows were open. It seemed at bit of an over the top reaction to both me and M. This continued for about an hour or so, and he was also rude to all the traders who were walking up and down the length of the train, cumbersomely carrying huge buckets of refreshments smothered in ice. I cannot stand rude people generally – who does ? and why the need ? Surely it’s all about tolerance and respecting people in the first instance, but then in addition the local culture. This bloke was raising my blood pressure and really getting me quite agitated. It was quite amusing when halfway through the journey, 3 scary looking armed policemen came on the train and stood in front of him and menacingly quizzed him on his behaviour. He was told very authoritatively to calm down and to stop upsetting people. After being spoken to like a small schoolboy, he was very quiet for the rest of the journey. Asshole.

Ayutthaya is a lovely place, basically built on an island at the confluence of three rivers. The old town is built around a beautiful landscaped national park containing various ancient ruined Wats, large monasteries and palaces. The place was built around 1350 and was the 2nd capital of Siam, after Sukhothai. The architecture and construction of the ruins seems identical to those found in Sukhothai.

When we left the train station, we had to jump a small ferry boat to take us over to the island, and then found a nice hotel just off the main backpacker drag which was had about 6 or 7 little bars.

We had a walk up to the night market for some nibbles, which meant sampling the fried fish, herby omelette and roasted chicken cuts before heading back for a couple of beers. We were up early next morning, shared a pot of jasmine tea, and picked up some snacks for a munch throughout the day as we strolled around the park taking in all the ancient ruins. We had little boiled eggs in a spicy batter, chicken skewers and little spicy sausages. This little picnic cost us only 30 Bhat, around 60 pence, and most of the stuff was eaten within an hour as everything was so scrummy.

The highlight for me was actually seeing the large sleeping Buddha. Although the ruins are interesting, it is hard to be blown away when you compare the site to the likes of Angkor in Cambodia or Bagan in Myanmar. Still, it was definitely worth the visit and great to get some peace and quiet away from all hustle and bustle of the city. 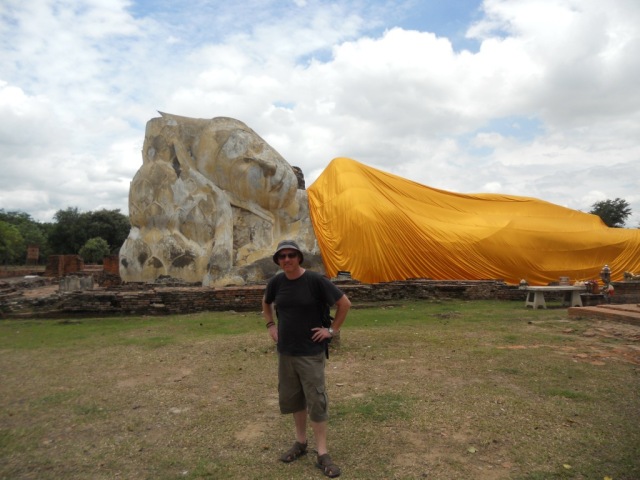 One whole day was really enough, so we decided to take the local bus westwards to Kanchanaburi about 3 or 4 hours away.

Kanchanaburi has plenty of natural features, such as giant caves and waterfalls, but it is also the site of the Bridge over the River Kwai and the Death Valley viaduct.

This just feels great, we are back doing what we love. You really just cannot believe how good you feel. Total freedom and constantly on the move, everything now seems so familiar in terms of the people and the culture. Nothing really phases us now, and the local transport is fun, especially when you have locals who go out of their way continually to smile and say hello – you just feel so welcome.

Can I just have my Lotto numbers come up this weekend please ?